Coming on Location to Help You Out!

A monster machine that bends 10″ pipe 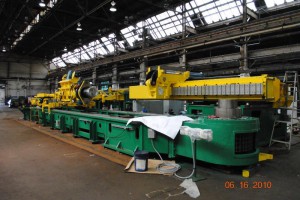 This machine is being built to bend 10″ round pipe. Tim “the tool guy” Allen from Home Improvement would be proud of this bad boy. 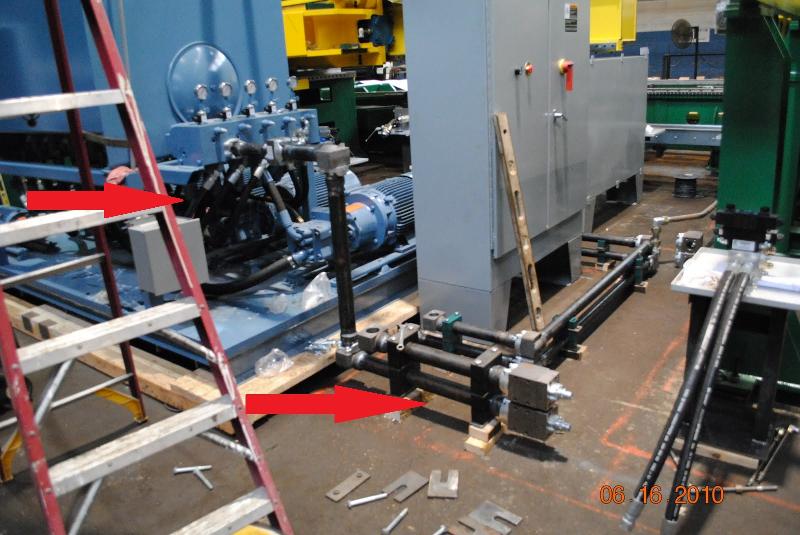 This is a project we did a couple years ago. We ran all the hydraulic piping, fittings, and hoses on the machine. The red arrows points out some of what we were helping them out with.
If you have a similar project like this one or need help trouble shooting a problem, let me know.
Craig Cook

How air is getting into your pressurized hydraulic system?

Air typically enters the hydraulic system through the the pump inlet and, under certain conditions, past the rod seal of a double-acting cylinder.aBut air can also invade the system through joints in pressurized plumbing.aWhen fluid travels through a pipe or hose at relatively high velocity – in a pressure line for example, and has to change direction through a tee or elbow, a venturi effect can be created.aBecause the sealing arrangement of the hydraulic connector is designed to withstand positive pressure – but not negative pressure, air can be drawn into the system – even when the plumbing has no apparent leaks.aIf you made a glass model of a pipe elbow and connected a measuring point in the middle of the angle, you would see a negative pressure when fluid passed through the elbow at high velocity.aAnd if you looked carefully, you’d likely see air bubbles entering the system through the seal of the measuring connection.aWhat it comes down to is use as few sharp angles – tee-pieces, elbows, etc in hydraulic plumbing as possible. a

Stopping the “Water Hammer” in Your Hydraulic System

In last week’s email, we talked about decompression and how to control it.

Let’s wrap up the topic of noise by talking about a phenomenon known as ‘water hammer’.

Water hammer is the term used to describe the effect that occurs when the velocity of the fluid moving through a pipe suddenly changes.
Sudden change in fluid velocity causes a pressure wave to propagate within the pipe. Under certain conditions, this pressure wave can create a banging noise, similar to that you would expect to hear when beating a pipe with a hammer. Hence the phrase.
Not surprisingly, common symptoms of this problem are high noise levels, vibration and broken pipes.
When a moving column of fluid hits a solid boundary – when a directional control valve closes suddenly for example, its velocity drops to zero and the fluid column deforms, within the rigid cross-sectional area of the pipe, to absorb the energy associated with its motion – similar to a car hitting a concrete wall.
However unlike a car, the fluid is almost incompressible so the deformation is small and a store of energy accumulates in the fluid – similar to compression of a spring.
The magnitude of the pressure rise that results from the subsequent release of this stored energy can be expressed mathematically as follows:
Pr = P + u p c
Where P is initial pressure, u and p are initial fluid velocity and density respectively and c is the speed of sound through the fluid.
Accumulators and other damping devices are sometimes installed in an effort to deal with this problem. However, the significance of the pressure rise equation shown above is that fluid velocity is the only variable that can be altered to address the root cause.
Put simply, reducing the velocity of the fluid column that hits the solid boundary, reduces the magnitude of the subsequent pressure rise.
Returning to the traffic crash analogy – the slower the car is traveling when it hits the wall, the less damage is caused.
In hydraulics, the easiest way to do this – on paper at least, is to increase the diameter of the pipe. This reduces fluid velocity for a given flow rate.

The other alternative is to control deceleration of the fluid column by choking valve switching time to the point where the pump’s pressure compensator and/or system relief valve reacts fast enough to reduce flow rate through the pipe and therefore velocity of the fluid.

There is another intermittent and problematic source of noise in hydraulic systems – decompression.

This problem arises because hydraulic oil is NOT incompressible. The ratio of a fluid’s decrease in volume as a result of increase in pressure is given by its bulk modulus of elasticity.

When the change in volume exceeds 10 cubic inches (160 cubic centimeters) decompression must be controlled.

If decompression is not controlled, the stored energy dissipates instantaneously. This sudden release of energy accelerates the fluid, which does work on anything in its path.

Uncontrolled decompression stresses hydraulic hose, pipe and fittings. It creates noise and can cause pressure transients that can damage hydraulic components.

Decompression is an inherent problem in hydraulic presses for example, due to the large volume cylinders operating at high pressures.

Although hydrocarbon-based hydraulic fluids compress 0.4% – 0.5% by volume per 1,000 PSI, in actual application it is wise to calculate compression at 1% per 1,000 PSI. This compensates for the elasticity of the cylinder and conductors and a possible increase in the volume of air entrained in the fluid.

For example, if the combined captive volume of the hydraulic cylinder and conductors on a press was 10 gallons and operating pressure was 5,000 PSI, the volume of compressed fluid would be 0.5 gallons (10 x 0.01 x 5).

This equates to potential energy of around 33,000 watt-seconds. If the release of this amount of energy is not controlled, you can expect to hear a bang!

Decompression is controlled by converting the potential energy of the compressed fluid into heat. This is achieved by metering the compressed volume of fluid across an orifice.